Week 9 Game of the Week - The Coke County Championship

When Robert Lee announced its move to six-man football for the 2004 season it was what many thought to be the death knell of this long standing county gridiron feud. In 2014 a faint heartbeat could be heard in this dead rivalry as the two schools agreed to play home and home for two years with the home team’s game being played (6man at Robert Lee in 2014 and 11man at Bronte in 2015). Then the rivalry seemingly died again…that is until the announcement last fall that Bronte would be making the move to six-man and the UIL releasing their new district alignments which fittingly reunited these two district foes. Thus in an instant the UIL Gods, in the same way Dr. Frankenstein resurrected the dead, delivered a lightning bolt into this dead rivalry, rejuvenating it with fresh life!

This is a rivalry that some sources say dates back to 1927 when Robert Lee defeated Bronte 78-0 and this week’s matchup will be 104th meeting between the Longhorns and Steers.

By using three separate sources and cross checking them the best I could with newspaper archives, it appears that the all-time head to head between Robert Lee and Bronte stands at 50-49-4 with Robert Lee holding the one game advantage. * Making this one of the most prolific high school football rivalry games in the state of Texas.

The game count was aided by the fact that these two teams played bi-annually almost every year from 1930-54 with their season finale against each other on Thanksgiving Day or the following Friday as a daytime game. This was a common practice for all schools across Texas at the time. The last “Turkey Game” was played in 1950 as the UIL put a stop to Thanksgiving games by adopting the policy that no regular season game could be played after November 22.

To get an idea about how heated this rivalry once was here is an excerpt from the Nov. 15, 1957 Bronte Enterprise in their lead up to the game being played the next day:

“Until 1954, two games were scheduled between the Longhorns and the Steers with the first game of the season being a non-conference tilt for the two clubs. After the first game that took place in 1954 at Bronte, a bit of trouble started between the players on each team, and the state boys at Austin voted to do away with the first game and only allow the two schools to compete in one contest a year. All down through the years, both teams have been placed on probation occasionally for uncalled for action on part of both clubs.”

The 2018 Rebirth:
Now that this rivalry is back in full swing, let’s look at this year’s game:

Bronte came out of the gates with a good start in their first ever season playing the streamlined game jumping out to a 3-1 start on the season. Since then the Longhorns have stalled having lost their last four in a row including two crucial district games to Eden and Veribest.

Bronte has utilized a veer version of the unbalanced I formation for the most part this season. Shifty downhill running back Garrett Knight is the Longhorns leading rusher with 651 yards, 14 TDs on the season with Riley McIntire adding 383 more with 8 TDs. Knight also leads the team in tackles with 63, with Riley McIntire (50), Colton McIntire (44), and Tanner Braswell (38, 2 defensive TDs) being defensive standouts as well.

Robert Lee also started the year off hot going 4-0 before falling at the hands of Highland and then losing a very close game to Grady the next week. However, the Steers rebounded week seven with a big 64-8 win over Veribest to kick off district play and are coming off a bye week last.

The Steers have a multi threat offensive attack that features four passing threats and three legitimate running threats. Daniel Mendoza (481 yards, 12 TDs), Manny Gamboa (388 yards, 6 TDs), Julian Gamboa (366 yards, 6 TDs) and Lane Fowler (335 yards, 5 TDs) combined have thrown for 1,570 yards and 29 TDs on the season. Jayton warren is the team’s leading rusher with 248 yards and five touchdowns on just 22 carries and leading receiver having hauled in 20 passes for 507 yards and eight touchdowns. Defensively Daniel Mendoza leads the team with 70 tackles (22 for loss), followed by Nathan Scates with 56 (20 for loss) and Hunter Jowers with 44 and has two defensive TDs on the year.

Keys to the Game:
Bronte will need to grind the game down with their running game, limiting Robert Lee’s time of possession and keeping those chains moving, as well as play mistake free football and winning the turnover battle. Defensively the Longhorns will need to have excellent coverage and a solid rush pushing the line into the Steers backfield and causing pressure.

Robert Lee needs to just keep doing what they do offensively and not get complacent with the ball, come out hitting on all cylinders, and strike early and often. Defensively the Steers will need to bottle up Bronte’s offense and force 3rd and 4th and long situations and then not get burned on passing downs.

My Take:
The old saying goes with rivalry games “you can throw the records out the window” and I believe this is for sure the case with this rivalry game. On paper it looks like Robert Lee is the clear favorite, but Bronte has been looking forward to this game all season and it is the typical trap game for the Steers. At 0-2 in district play Bronte has everything to gain and nothing to lose and will be out for blood as a win this week will trump everything else for them... this might as well be their state championship game…but just how much of an X factor can that be? The flip side to all that is Robert Lee is also going into this game like it was for the state championship as well, and it is the Steers homecoming to boot! So they will have a big crowd of alum back for the re-birth of this rivalry. I think this game will be hotly contested early with Bronte full of fire and vinegar, but Robert Lee’s ability to have any number of players lead the offensive attack will wear down the Longhorns secondary. Robert Lee 60 Bronte 36

*Some game scores I have not yet confirmed, including the reported 78-0 1927 score, seven of which only a winner was recorded with no score. There are also at least two other games with scores that need to be researched and verified to be 100% sure, but limited access to newspaper archives makes it very strenuous. Sources used were Joe Smith’s Texas High School Football History, Lonestarfootball.net database, and a list of scores obtained from Robert Lee ISD.

The game will be broadcast by Texas 1A Fan Friday night and here is the link you will need to listen along
http://mixlr.com/tx1afan/

Mr. Saunders; I have a six man football question. I am researching Jonesboro football history & think that they have been playing six man continually since 1949. My question is this the longest unbroken streak for any Texas school? Any help you can give will be appreciated.
Willis Dossey, Sr. e-mail willis.dosseysr46@yahoo.com

wjdsr46 said:
Mr. Saunders; I have a six man football question. I am researching Jonesboro football history & think that they have been playing six man continually since 1949. My question is this the longest unbroken streak for any Texas school? Any help you can give will be appreciated.
Willis Dossey, Sr. e-mail willis.dosseysr46@yahoo.com
Click to expand...

I think there is an old thread where Leman and I were discussing this topic.

Here's a post by @Leman Saunders where he mentions Jonesboro as having the longest streak, along with a few other teams. 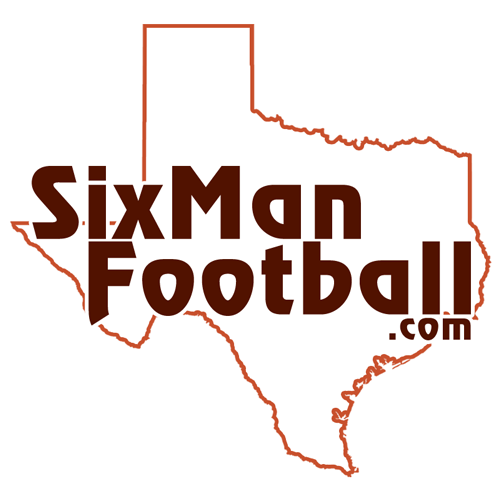 also checking OBK's math there and he is off on Gustine and Mullin it appears. Longest current streak of playing 6man football (correct me if I am wrong) Paint Rock, Jonesboro, Sidney - 1949-present = in their 71st straight season of 6man Gustine, Mullin - 1950-present = in their 70th straight...

just saw this...will try to check it out but ya seems like a topic discussed in the past so thats probably right...I can tell you (proudly I might add) Blackwell has played the most total season of 6man football but it is not continuous.

Week 9 Players of the Week