Six-Man football, invented in Nebraska, took off. Six-man baseball? Not so much.​

If football could be played with just six players to a side, Stephen Epler figured, why not another sport?

Today, Epler is known as the father of six-man football, the teacher at Chester High School who, nearly 90 years ago, invented a game that small Nebraska schools like his could play.

Some 32 Nebraska schools fielded a six-man football team this fall, illustrating that Epler’s creation is alive and well in his home state.

But hardly anyone realizes that Epler, buoyed by his six-man football success, also tried to invent a way for small towns to more easily play the National Pastime popularized by Babe Ruth, Hank Aaron and Nebraska native Bob Gibson. To play a variation of the sport the Los Angeles Dodgers, New York Yankees and others are now playing as they fight to make it to this year’s World Series. 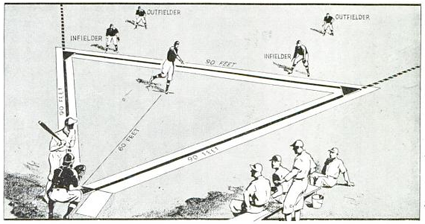 Breaking down the pluses and minuses of a "six-man baseball" game, a game explained in a 1939 issue of "Popular Mechanics".

Interesting for sure. I wonder if the higher scoring would also translate to the baseball field?