4/2/2012
NELSON, Ga. (AP) — Backers of a newly adopted ordinance requiring gun ownership in a small north Georgia town acknowledge they were largely seeking to make a point about gun rights.

The ordinance in the city of Nelson — population 1,300 — was approved Monday night and goes into effect in 10 days. However, it contains no penalties and exempts anyone who objects, convicted felons and those with certain mental and physical disabilities.

City Councilman Duane Cronic, who sponsored the measure, said he knows the ordinance won't be enforced but he still believes it will make the town safer.

"I likened it to a security sign that people put up in their front yards. Some people have security systems, some people don't, but they put those signs up," he said. "I really felt like this ordinance was a security sign for our city."

Another purpose, according to the city council's agenda, is "opposition of any future attempt by the federal government to confiscate personal firearms."

Council members in Nelson, a small city located 50 miles north of Atlanta, voted unanimously to approve the Family Protection Ordinance. The measure requires every head of household to own a gun and ammunition to "provide for the emergency management of the city" and to "provide for and protect the safety, security and general welfare of the city and its inhabitants."

Nelson resident Lamar Kellett was one of five people who spoke during a public comment period Monday night and one of two who opposed the ordinance. Among his many objections, he said it dilutes the city's laws to pass measures that aren't intended to be enforced.

"Does this mean now 55 miles an hour speed limit means 65, 80, whatever you choose? There's not a whole lot of difference. A law's a law," he said.

Kellett also said the ordinance will have no effect, that it won't encourage people like him who don't want a gun to go out and buy one.

The proposal illustrates how the response to the massacre at an elementary school in Newtown, Conn., varies widely in different parts of the country.

While lawmakers in generally more liberal states with large urban centers like New York and California have moved to tighten gun control laws, more conservative, rural areas in the American heartland have been going in the opposite direction.

Among the other efforts to broaden gun rights that have surfaced since the Newtown killings:

— Earlier Monday, lawmakers in Oklahoma scuttled a bill that would have allowed public school districts to decide whether to let teachers be armed.

— Spring City, Utah, passed an ordinance this year recommending that residents keep firearms, softening an initial proposal that aimed to require it.

— Residents of tiny Byron, Maine, rejected a proposal last month that would have required a gun in every home. Even some who initially supported the measure said it should have recommended gun ownership instead of requiring it, and worried that the proposal had made the community a laughingstock. Selectmen of another Maine town, Sabbatus, threw out a similar measure. The state's attorney general said state law prevents municipalities from passing their own firearms laws anyway.

— Lawmakers in about two dozen states have considered making it easier for school employees or volunteers to carry guns on campus. South Dakota passed such a measure last month. Individual communities from New Jersey to Colorado have voted to allow administrators or teachers to carry guns in school.

Located in the Appalachian foothills, Nelson is a tiny, hilly town with narrow, twisting roads. It's a place where most people know one another and leave their doors unlocked.

It used to be a major source of marble, with the local marble company employing many in town. But that industry is mostly gone now, Mayor Mike Haviland said. There are no retail stores in town anymore, and just about everyone leaves town for work now, making it a bedroom community for Atlanta, he said.

The mayor said he never dreamed his small city would be the focus of national and international media attention, but he understands it.

"It bumps up against the national issues on guns," he said.

Police Chief Heath Mitchell noted that the city doesn't have police officers who work 24 hours a day and is far from the two sheriff's offices that might send deputies in case of trouble, so response times to emergency calls can be long. Having a gun would help residents take their protection into their own hands, he said.

But the chief — the town's sole police officer — acknowledged the crime rate is very low. He mostly sees minor property thefts and a burglary every few months. The most recent homicide was more than five years ago, he said.

The ordinance is modeled after a similar one adopted in 1982 by Kennesaw, an Atlanta suburb. City officials there worried at the time that growth in Atlanta might bring crime to the community, which now has about 30,000 residents. Kennesaw police have acknowledged that their ordinance is difficult to enforce, and they haven't made any attempt to do so.

Leroy Blackwell, 82, has lived in Nelson for about 50 years and owns a hunting rifle he keeps in a closet. He said before the council's decision that he would support the ordinance even if it didn't have exemptions, but he would have preferred it to be voluntary.

"Really, I think it would be more fair to put it to a vote" so everybody could have a say, he said. 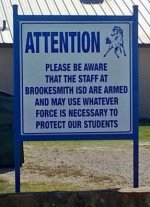 I'm hearing rumors that several other sixman schools are allowing teachers with a CHL to carry, but i haven't verified the rumors.

A Long and Rambling End
2