Can I get a clear cut explanation on what the boundaries are for cut blocking by RBs and WRs? I’ve been given at least 3 different explanations this season and none of them are consistent with the other.
L

It all depends on where they line up and whether or not they are in motion at the snap. Before we get into this, it’s important to remember that the tackle box is defined as 5 yards laterally on either side of the ball and goes from the line of scrimmage all the way back to the offense’s end line. It does not grow or shrink depending on your formation.

If a player is on the line of scrimmage in the tackle box at the snap, he may block low from the front or side in any direction as long as the ball and the blocker have not left the tackle box.

If a player is stationary in the backfield in the tackle box at the snap, he may block low in any direction until he or the ball leave the tackle box. However, unlike a player on the line, he may only block from the front, or “10 to 2”. If he blocks low from the side, it is a foul.

Once the ball or blocker leaves the tackle box, all low blocks must be away from the original position of the ball and from the front no matter where the player was at the snap.

Also, once the ball leaves the tackle box, nobody may block low toward their own end line.
J

To add to Legacy, it is also illegal to block below the waist in any direction when the block is 5 or more yards downfield.
L

Yeah, I thought I had put that at the very beginning, but I guess it got deleted as I was trying to edit together my response. Thanks.
Z

For those of you following back up -- that rule has been completely rewritten for 2022. Not going to go into all the details here unless there is a desire for it.
H

ZeroRisk said:
For those of you following back up -- that rule has been completely rewritten for 2022. Not going to go into all the details here unless there is a desire for it.
Click to expand...

I would like to know what the new rule is. Can someone post a link to it, or summarize it?

Here's a quick summary doc I put together. @Legacy Zebra and @JasonTX please let me know if I missed anything.
D

Just realized - the TE referenced is for 11-man football, not 6. Other than should all be the same.
L

The defensive side of your doc needs a couple tweaks. The defense is allowed to block low from the side. But all low blocks by the defense must be on the initial charge whether its from the front or side.

Things that are no longer legal that used to be:

And most importantly, a defensive player cutting a lead blocker on a sweep or counter play.
A

Man sounds like we’ll be throwing the little guys to the wayside now. Bring out the big boys.
That’s a shame I loved watching some beautiful cut blocks to open up the green pastures on a sweep. Gives the game more of an 8man feel to it IMO.
M

I like it, weight room is more important than ever now for 6man teams… gonna miss the cuts though but I love the rule change

So this is where this gets fuzzy for me in the 6-man Game. Say the Offense is in a "Diamond Spread" formation. It's a sweep to the Right.
So can My Right Up-back can't cut block that PSDE? Because in a Deep Backfield Spread formation like that, what counts as the "Tackle Box?"

Hopefully I'm making sense with this. But this new released rule seems to be very heavy 11-man related and there's just a lot of grey area when it comes to the unique 6-man formations we see.
L

The tackle box is defined as 5 yards to either side of the ball at the snap and all the way back to the offense's end line. That definition is the same in 6- and 11-man football.

So it doesn't matter how far back they line up; what matters is how wide they line up and where the block occurs. If the up back is less than five yards to the left or right of the ball, regardless of depth, he is in the tackle box. As long as he is stationary at the snap, he is allowed to block low within the tackle box as long as the ball is still in the tackle box and the block is from the front. So here are some rough diagrams to try to illustrate what I think you're talking about. Obviously not to scale. Let's say player number 6 is carrying the ball here. 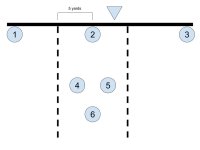 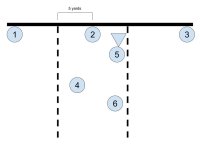 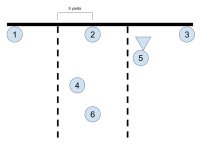 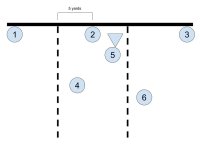 It’s simple, just hit weight room more and tell the guys get ready to use strength, good technique and drive those feet!! They’ll be fine! This is good in my eyes for 6man players to get evaluated better for next level. In my opinion.. this is good conversation though let’s keep it going

I just hope it eliminates that crap where the defense comes flying in and cuts the offensive lead blocker to me that is one of the most dangerous this we have going on. Take that lead block on and quit trying to take a knee out every play.
L

That is one of the main blocks that the rules committee wants gone. The only time the defense is now allowed to go low is immediately after the snap. So a defender cutting a pulling guard or lead blocker on a sweep is now a foul.